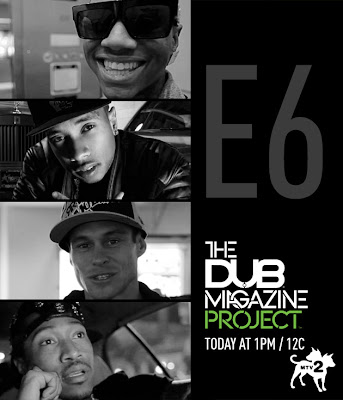 I lose track of the numbers. But on to the recap
Machine Gun Kelly… I like that background eye candy.
Soulja Boy. **hysterically laughs** As he drives to his “meetings” in the Bentley Continental GT that he crashed in Los Angeles. To be honest, I forgot that his music originated in Atlanta. I can’t listen to his rambling. I think he rambled about buying his first car with cash. He was smart with the whole using the internet to get a record deal, but that was the last time he did anything smart. He didn’t talk about cars (thank goodness), so on to the next segment. I laughed cause I didn’t think people would still be interested in Soulja Boy. This isn’t 2008.
Tyga, Tyga, Tyga… The red Phantom didn’t look bad, but that gold Audi R8… I mean he was the first with the gold Audi R8, but hopefully he will be the last. I wish they would have filmed Tyga’s segment AWCC and not BWCC. BWCC is the time period before Tyga went go to West Coast Customs, AWCC is the time period that Tyga came to his senses and went to West Coast Customs. But I did see Blac Chyna, you can’t hide her with that blond hair.
Dub Garage customized Tony Hawks’ vehicles. Tony kept Myles and his crew busy by bringing three vehicles- a Lexus hybrid and a Mercedes CLS 550- those two only needing wheels and tires (which can be done in a couple of hours), but the third vehicle needed work- the team van needs wheels, tires, custom sound system, AND some skateboarding racks for the team to put in there. Will the Dub Garage finish? We shall see….
Brian Deegan’s mode to blowing off some steam looks fun. Although it’s extremely country (he did say he’s from Nebraska), I wouldn’t mind doing that. I’m pretty open to things.
Shop talk goes to Towbin Motorcars in Las Vegas. Chop… I like Chop. He has energy, I love him. They should have given him the entire show. That blue genie was a little scary though. But at least America knows where Floyd Money Mayweather gets his Rolls Royces from.
Atlanta’s own, Future. Driving around LA in a Bentley Continental GT on Forgiatos. I love raspy voices, but I would have rather seen Sean Kingston’s car collection. You asked, I answered…
Next episode has Pauly D on it!!!! And here’s the episode…
The DUB Magazine Project – MTV2
I’m just a little excited to see Pauly D. Just a little.