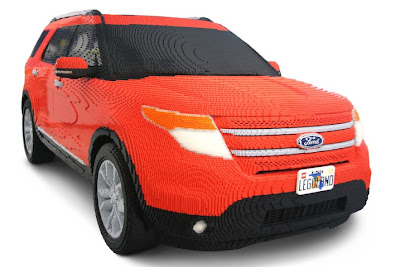 Legoland Orlando is the proud owner of a lifesized Ford Explorer… made of 382,858 legos. According to Ford, the Ford Explorer Lego version was created by 22 designers and weighs 2,654 pounds. It is supported by a 768-pound interior aluminum base.

The Lego SUV will be set up in front of the Ford Driving School for children at the new theme park. Kids as young as three can attend, where they will learn “the difference between the accelerator and the brake — and move on to stoplights and stop signs,” said Ford in a statement.

“Children then have the opportunity to drive in their own electric vehicles on curbed roads with maximum speed limits of 3 mph,” said the automaker.

The common wisdom in the auto industry is that if you can win over a child, that child will aspire to own your products when he or she grows up. Porsche famously sent its ad agency into California kindergartens in the past to figure out what kids wanted to drive. Of course, they all drew pictures of red convertibles when given crayons and paper and asked to create their dream ride.

Check out the time lapse of the creation below…

I love fun stuff like this, but then again I’m still a kid at heart.