This Sunday was episode four of the Dub Magazine Project. The series is starting to become more and more of a lifestyle series, and a smidgen less of an automotive series. Which means I can’t really comment, or I chose not to comment if it’s not about cars. 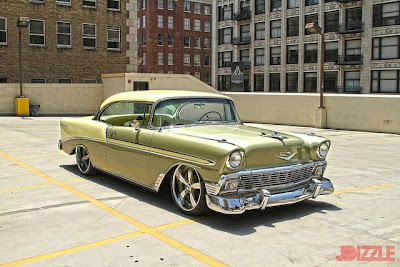 The host of the show, The Game and his co-host for this week, an old school, lowriding Chevy Bel Air sitting on Forgiano Ritorno Wheels. This is actually the first car that I’ve seen him with on this show that I would knock him over to get to. Something about those Bel Airs, but lately I’ve been seeing them more and more at different car shows (i.e. The Lowrider Car Show (ESPECIALLY in Los Angeles) and the World of Wheels Car Show)

Before a commercial break, Dub pieces together clips from interviews with different people answering the same question. This question had to do with cars, and asking famous people if they have the skills to work on a car. Surprisingly Nick Cannon said that he’s worked on cars, changing breaks, etc. But poor Waka Flocka admitted that he can’t do anything to a car other than drive it, he doesn’t know how to change the oil.

Oddly enough, I like the Skatebording series with Paul Rodriquez and Terry Kennedy, and I don’t know the first thing about it. Nike Sponsored Skateboarder Paul Rodriguez pulled up to Ghost Motorsports to get wheels and tires put on his silver Jaguar XJL and it looked gooooooooood. That Jaguar has my heart, even the non-supercharged XJ makes my eyes twinkle. Terry Kennedy pulled up in a Nissan GT-R (insert confused look here), but I gave him credit when he mentioned how those from his area of Long Beach tended to gravitate towards sports like basketball and football, and how he didn’t want to be like everyone else.

Poor Ernie and his shop still dealing with Shaq’s nonsense and changing his mind about that Mustang as often as he probably changes his underwear.

The extremely brief yet most informative Under the hood segment had to do with Borla Exhaust and how they create their famous stainless steel exhausts.

P.S. I’m still waiting for that Amber Rose episode. And also, how come there hasn’t been any New Yorkers on this series yet? New Yorkers like cars…