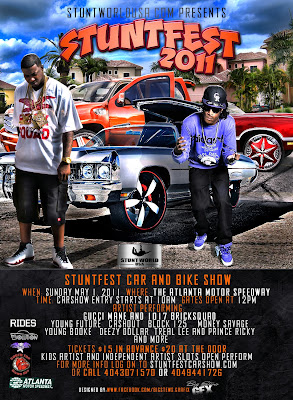 On May 1st, I attended my second Stuntfest Car Show. Like last year, it was held at the Atlanta Motor Speedway, and also just like last year: The Stuntworld Guys made sure that there were more than enough cars at the show. I did get to meet some new people, and I ran into some familiar faces. One of the faces I haven’t seen in awhile, and was talking to him about cars, but his insecure fiancee wasn’t having that, and ordered him to stop talking to me. I could choose to say what I really thought about that situation, but it takes away for what this post is about: the 2011 Stuntfest Car Show. 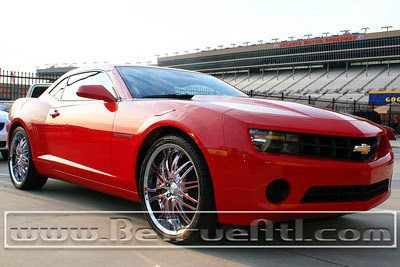 Unlike the tragedy called the Dub Concert (20 cars does not make a car show) last week, Stuntfest did the opposite as Dub and of course it was a proven success, as far as the cars were concerned. Although the Stuntworld guys wouldn’t know me if they walked past me down the street, I give credit when it’s due, and they throw the best show in the Atlanta area. And here’s why…

One: Outdoor shows are a bit more practical. That way, the owners can show up throughout the show, and they’re not forced to show up within a two hour time period. Even though weather is a factor, but it rained for an hour during the 2010 Stuntfest, and that didn’t stop people from coming out. It was also hot, and that still didn’t stop people. 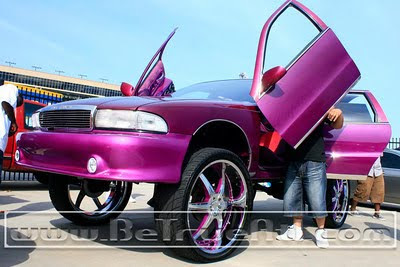 Three: I said it before: Stuntworld knows who to call to come out to the show. Some say that they called all their friends in Atlanta. If that’s the case, why were there so many out of state plates there: South Carolina, Florida, North Carolina, Alabama, Texas, etc… And Four, which is a spinoff from Three: They don’t use the performances as a cover for the lack of cars (See DUB as an example).

Now, as far as the performances are concerned… Last year they had a pointless rapper sing about her Onion Booty. This year, the pointless song was “I’m A Hood Chick”. Seriously??? I don’t care to know what she look like or who she was. The fact of the matter was the song sucked. And believe me, I love Hip Hop music. 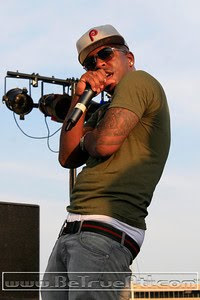 The original headliner was suppose to be Gucci Mane. But a few weeks ago, Gucci decided to show an Atlanta female what a gentleman he was (I’m being sarcastic, but in all the times I seen Gucci, he’s been nice to me) and push her out of a moving Hummer, and last I heard, he still hasn’t made bail. So Stuntworld acted fast and pushed up Future and Monica’s Baby Daddy, Rocko as headliners. Future is popular because of being featured off of Chris’ song “Racks On Racks”. And Monica’s Baby Daddy has a song out too, but I could care less about it. Rocko isn’t exactly my favorite rapper to photograph, but that’s just me. And I’ve also seen him more times than I choose to remember.

All in all, I did have fun at the 2011 Stuntfest, and I can’t wait for what’s in store for the 2012 one… If only all car shows could be like this. One could only dream… But I’m anxious to see how they will top this year’s extravaganza.

For more photos from the show, check out Bernie’s 2011 Stuntfest Gallery.